IMTBIKE has always wanted to visit Japan and have a Global Tour there. The golden opportunity arose thanks to Moto Tours Japan along with the Japanese government.

But I´m not going to kid you, flying 20 hours to Tokyo for just three days right after finishing a two-week tour in Southern Spain did not seem like the smartest plan in the world. But at IMTBIKE we like to “roll the dice” and also push our limits. And I´m glad I did!

I still hadn´t left the plane from Malaga to Madrid when my good friend Scott called to say I could forget about checking in, we were still on the waiting list and not guaranteed a seat. I had never run so much inside an airport nor had I skipped so many queues (politely asking of course, just as any IMTBIKE Guide would!) Only was I told I could fly to Tokyo when arriving at the boarding gate. We arrived only one minute before boarding gate closed! And right there, a nice hostess, who seemed like an angel directly from heaven, told us we could embark. We even got seats together!

In the plane now! I still couldn´t believe it. Sweaty, agitated and the still revved to the max … But smiling and happy inside. – Hostess, two beers please. We have to celebrate!

I was quite afraid of jet lag. I´m unable to sleep on planes and knew it would be a long flight. But the excitement of arriving to the land of the rising sun in company of a good friend kept me well entertained.

We stayed at Rental 819´s premises in Odaba, Tokyo. They had very nice staff always doing their best to accommodate us. Although I had previously worked with Japanese people in my time as a motorcycle journalist, this time it was a true immersion in the fascinating Japanese character. They displayed a wonderful mix of exquisite education, dedication and professionalism as well as a comforting and happy attitude towards our more Mediterranean personality.

We first had a fun briefing to get to know each other, then spoke about the tour itself and finished the day at a typical Japanese restaurant with the best sushi ever. The romance only continued for the following days! Fortunately this time, unlike previously, there was space to place the legs under the table, which was greatly appreciated by my knees, punished by old injuries.

The three day tour ran mainly around the biggest icon of the country: Mount Fuji. Having seen its splendor  in a thousand pictures it simply hadn´t got to me as it did when standing at sight of this magical mountain. We were very lucky that the weather gave us excellent visibility (our Japanese friends couldn´t say it enough times) which allowed us to enjoy its entire beauty.

Exiting Tokyo on its highways with traffic and tolls was a little tiresome but we eventually found ourselves riding a nice and fun route on secondary mountain roads. At this time we were all comfortable with driving on the left lane, although one can never become too comfortable of that fact! That could be very dangerous!

Although the area we covered was small in size our new partners did a fantastic job in choosing the roads. We enjoyed all the beauty with two brand new R1200 GS.

The route was sprinkled with stops that allowed us to learn quite a bit about the local culture. This was the case with the traditional Hakone Yosegi Zaiku woodwork shops, a perfect example of Japan’s philosophy applied to work: tradition, respect, quality, precision, pride… All exemplified in various everyday objects. A highlight would be the Magic Boxes with secret opening methods in its structure. Some quite simple like the ones Scott and I bought for our daughters, others had many combinations.

We then had a lunch stop for some delicious giant noodles in Houtou after surrounding the beautiful Ashi Lake (Ashinoko) on fun mountain stretches. That day we even went to visit the small village called Oshino Hakkai with its traditional houses and relaxing ponds.

The second day started with a cable car visit to the Owakudani Mountain viewpoint. It had us pass over its volcanic vapors which are also used to boil the famous “black eggs”. Their shells acquire that color when cooked!

The landscape so far often seemed alpine although the constant sighting of Mount Fuji would bring you back to our real location. However, this changed on the last day as we approached this traditional accommodation along a beautiful rugged coast. The extraordinary and hospitable reception we received at the hotel on the cliffs of Dogashima made us feel important, as if we were official country representatives! At night, once again we laughed like children when dressing up for the occasion with traditional kimonos. It was a nice costume that presented everyone at the table as equal. We were also treated to a performance of traditional drums and abundant food.

It was time to return but we first went to visit a wasabi factory and made wasabi with our own hands. We even tried wasabi ice cream! Our return to Tokyo was through a lush forest and then back on its highways. But the cherry on the top was the superb fish we had for lunch in an active fishing village, right in the local market!

In short, it was a very fun yet intense trip that has truly got us wanting to know more about this wonderful country and its culture.

Up for coming with us? 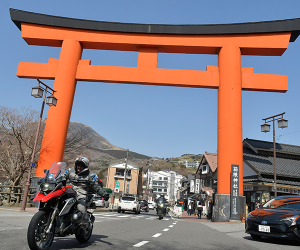