Words and images by Ryan Brunhaver.

Madrid is one of the best cities in the world for a motorcyclist. We have a warm, dry climate and are surrounded by mountains full of twisty roads and grippy pavement. There are dozens of great rides within an hour or two of the capitol providing us with a plethora of options for a one or two day escape on two wheels.

When you rent a motorcycle with IMTBIKE we are always happy to sit down with you and point out our favorite roads on a map before you start your ride. Some of us were born here, others moved to Spain for the riding but we all have something in common: a passion for motorcycling that we are excited to share with you.

Today’s installment of Ride Madrid explores the little known region of Guadalajara and its curious black stone towns made of slate.

I left Madrid on a chilly March morning with BMW’s 2016 R1200RT. I set the heated seat and hand grips to high and the enormous windshield in the tallest position for extra protection from the elements. From the center of Madrid to the top of the Somosierra mountain pass I had almost exactly 100km of freeway which the RT handled elegantly. My idea was to ride the big freeway due North and then circle around to the east through the region of Guadalajara on little known back roads through some of the most remote areas in this part of Spain.

I arrived quickly and comfortably to the mountain pass over the “Sierra Norte,” which separates the capital from the large plains of Castilla Leon, and took an immediate right on the N-110 just a few kilometers later. In the 110 I enjoyed my first curves of the day before stopping in Riaza for a coffee.

The morning air was crisp and cool but already warming up, giving me no warning of the large detour I was about to make. The SG-112 back over the same mountains was to be my first real conquest of the day. It’s a tiny rural road, paved, but barely one and a half lanes wide that meanders over a small pass with no name and dives straight into the heart of the black stone towns of Guadalajara (Castilla La Mancha). But just past Riofrío de Riaza I was met with defeat with a road closure due to snow. I considered for a minute that I could try and make it over but the 600+ pounds of the RT convinced me to turn around. I pulled out my map and started plotting my second attempt into Guadalajara. 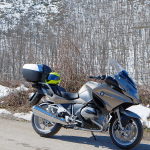 The plan for the day was to explore the black towns or “pueblos negros” of Guadalajara and I still had a ways to go before reaching the first of these towns. To my surprise there were some equally photogenic attractions along the way, although of a slightly different hue. Still on the northern side of the Sierra Norte I began the search for an alternative entrance into Guadalajara. I started to see signs for the red towns or “pueblos rojos” as I continued east along the lonely SG-V-1111. Blending in with the red dirt of the surrounding hills, and contrasted only by the pine forests were a series of small towns with houses and buildings constructed of red stone and clay. I stopped in Madriguera to have a closer look at the construction. 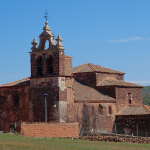 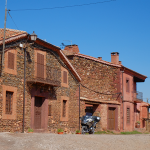 Notably, even the newer houses were built respecting the color and style of the original buildings, an aesthetically pleasing method of maintaining an ancient “pueblo.”

The multicolored adventure continued and just 6km later I turned onto the CM-110 and climbed onto a high plain up and over the mountains into Guadalajara. The 110 is straight as an arrow and big enough to warrant regular maintenance. It was not only free of snow but totally dry, whisking me quickly back onto my original itinerary. 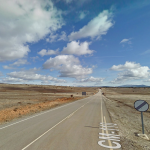 I turned towards Galve de Sorbe on the CM-1006 and drove past small sleepy towns and lonely castles surrounded by a harsh arid landscape. 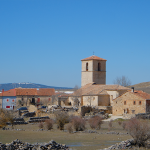 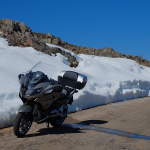 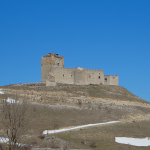 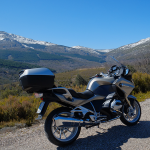 Below, the town of Valverde de los Arroyos set deep in the mountains of this remote region was my first pueblo negro of the day. 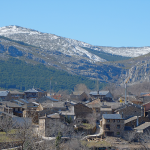 Continuing on the GU-211 I headed towards Tamajon but just before the town, I turned right onto the GU-186 towards the most important, and most remote pueblos negros of the region, Campillejo, Roblelacasa, Campillo de Ranas, Robleluengo and Majaelrayo. With names like that it’s difficult to not be curious! The first part of the road after Tamajon is fantastic passing some interesting rock formations and a few nice picnic areas with well signed hikes and walks. 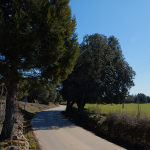 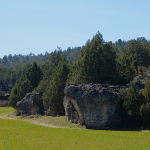 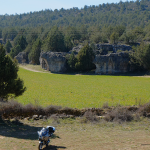 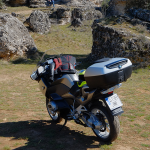 Finally arriving in Campillejo, I was ready for lunch since I had taken longer than planned to get here. Luckily there was one restaurant in town with a fire blazing and all sorts of roast meats, hearty stews and cold beer greeting me as I walked in the door. If there’s one thing you won’t be short on while traveling Spain on a motorcycle, its local restaurants serving hearty meals. I dug into a bean stew with chunks of Chorizo sausage and sipped a cold beer as I looked over my map again. I still had a few big “musts” on my itinerary that I wanted to see to in order to round off the day and according to my calculations I could still finish the original route if I didn’t linger too long in each place.

After lunch I took a stroll to appreciate the unique architecture that is the theme of today’s ride. There were a few other day trippers in the restaurant and it seemed to be a well-known spot for lunch. Outside, a few kids were kicking a ball around in the street. There was a sense of quiet and solitude that makes you want to stay the night and experience this place a bit longer. More than one night however would probably reveal the remoteness and harshness of the region that has caused many of the locals to abandon their homes and move to the larger cities of the region. These towns, however beautiful, are a bit nostalgic in the sense that very few people actually live in them today. There are a few rural lodgings and a restaurant but the majority of inhabitants today are of the four legged variety. 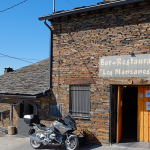 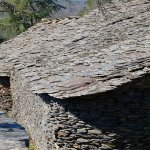 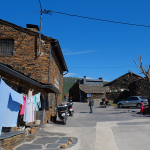 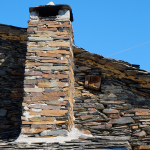 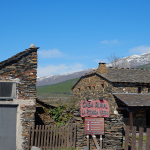 Photographically speaking, after lunch came the grand highlight of the day. The locals refer to this stretch of road as the “Great Wall of China, of Guadalajara” and it is indeed an impressive engineering feat. 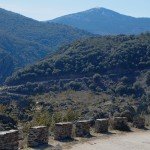 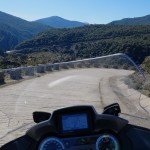 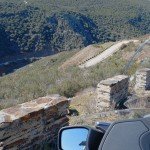 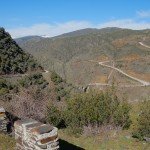 The “great wall” is part of a small local road between Corralejo and Roblelacasa and if you plan on riding it, keep in mind that its very technical with steep, sharp curves and rough pavement. If you are not an experienced rider its best to park the bike before the switch backs and walk over to appreciate the view.

From here I actually turned around and rode back to Roblelacasa because I still had plenty of daylight to visit the impressive castle in the town of Jadraque meaning I had to backtrack slightly.

I headed back to Tamajon then south towards the GU-189, a fun road with some nice curves that ends at the CM-1001. From here I connected Cogolludo, San Andrés del Congosto and then La Toba on various roads to get to Jadraque. Once in Jadraque, the best view of the castle is south of town one or two kilometers on the CM-1000. In the end I stopped for the view and a snack but did not ride up to the castle. The view itself was worth the stop.

The castle dates from the 15th century and is locally known as the “Castle of Cid” due to it being mentioned in the Poem of the Cid, the oldest preserved Castilian epic poem telling the story of “El Cid” during the Spanish re-conquest of the Peninsula from the Moors. 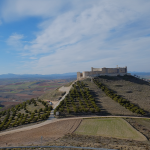 To finish off the day I could have taken the A-2 freeway directly to Madrid but instead I crossed under it and passed through Brihuega to pick my way back to the capitol on smaller back roads and continue enjoying the magic of rural Spain.

It was a long ride, around 500 kilometers and can of course be broken up by a night in one of the beautiful remote towns. It can also be tagged on to the previous Ride Madrid route, “A Tale of Three Castles,” by connecting Pedraza and Riaza.

As always, ride safe and have fun! 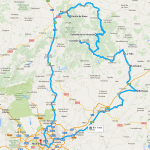