Peter´s first Motorcycle Tour as a Guide at IMTBIKE

“Peter, in wo weeks the IMTBIKE Southern Portugal & Andalucia motorcycle tour begins, you want to drive the van?”, I received this WhatsApp message in while riding in the Sahara Desert.  This area is an offroad paradise and home to the great Erg Chebbi sand dunes. I had just gotten off the bike and I still had a big smile thanks to the great ride today. Only a week before I had spoken with Scott Moreno, IMTBIKE Managing Director, about a possible collaboration. Of course my answer was “Yes”, – I had no doubt in participating in the tour. Two weeks later I was sitting behind the wheel of the van zigzaging through the famous “Goat Road” curves between Almuñecar and Granada. In front of us, guided by IMTBIKE head guide Sergi Besses, the other bikers were enjoying chicane after chicane inbetween deep cliffs and steep summits. 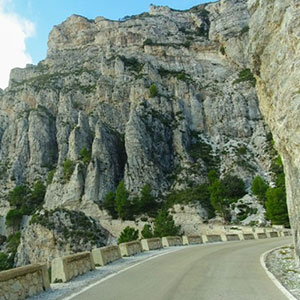 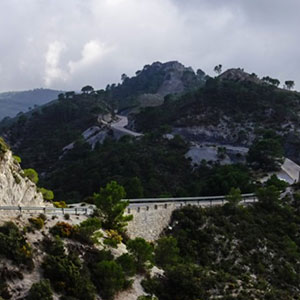 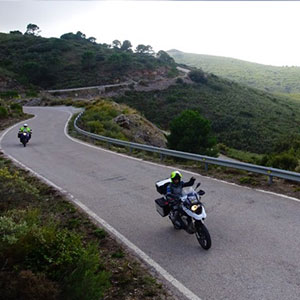 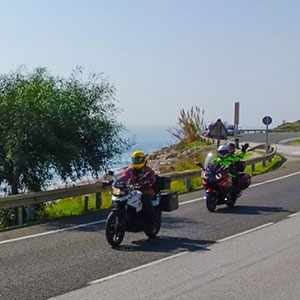 I am finally doing what I wanted for a long time. Accompanied by the sun and enjoying the great variety of landscapes in Spain and Portugal, I am guiding motorcyclists from around the world on fantastic traffic-free roads. Sergi didn‘t exaggerated when he explained today’s ride during the morning briefing. Just last night we went for a traditional dinner in the busy streets of Malaga and today for lunch we enjoyed a delicious paella on the beach of Nerja. But I had to remember that I was working: Who has an allergy? Who is a vegetarian? Sparkling water or spring water?… and who wants what kind of coffee? This and much more must be taken into account and explained to the waiter. Thanks to a long collaboration with IMTBIKE, all restaurants were prepared and attentive to all these details. I was lucky that my debut tour was with a small group, which made “suitcase management“ duties i.e. carrying luggage to and from the support van to the hotel much easier.  In addition, Sergi always had everything under control. His experience was noticeable and it impressed me how he quickly changed his roles. At one point he was the “responsible” motorcycle guide talking about safety and in the next situation he was the “very fun” tour guide on a motorcycle. Sergi is a excellent teacher and he explained all aspects of running a successful tour to me perfectly. There was a lot of team spirit and even though we had only met a few days ago, the collaboration between us worked very well. But this is the important thing in our profession – empathy, people skills and attention. This is how we manage to present our clients with an unforgettable motorcycle trip without difficulties. Apart from good food and nice hotels, you should first enjoy riding a motorcycle with pleasure. 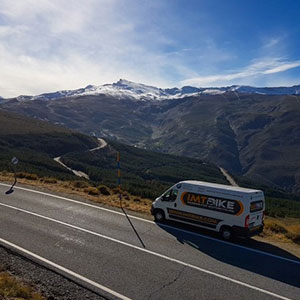 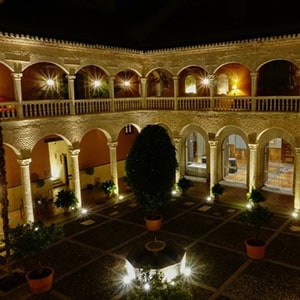 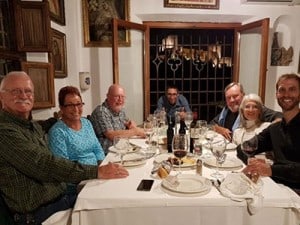 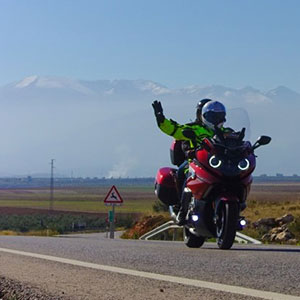 After about 200 kilometers and usually around 5pm we would arrive at our awesome hotels for the evening. Thanks to the pre-check in, one of the myriad things organized by our Madrid head office, our tourmembers were handed a room key quickly and they didnt have to wait to go to their rooms for a shower and rest. As long as everything is fine, Sergi and I, also have a brief moment of rest but not today, because before dinner we had to manuver the support van through the little streets of Granada to the parking lot.  Trust me this is not an easy feat!  The next day was a “rest day”, some tourmembers  planned to visit the famous Alhambra; while some others decided it was a great day for shopping and the others opted to go take advantage of their motorcycle and ride to the blue sky of Sierra Nevada, the highest mountain in mainland Spain. 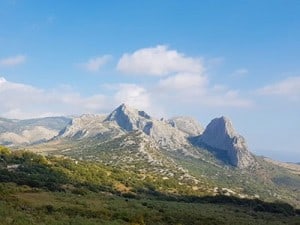 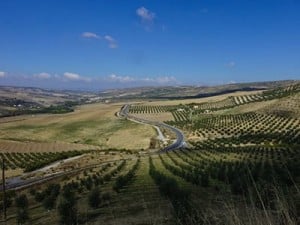 After Granada we went to the so-called heart of Andalusia – the city of Antequera. Another day with fantastic routes between the infinite fields of olive trees and spectacular views of the surrounding mountains. In the evening another Parador awaited for us with a delicious dinner. 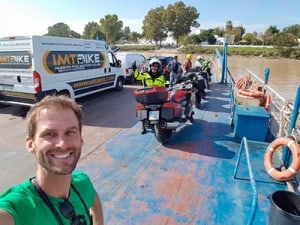 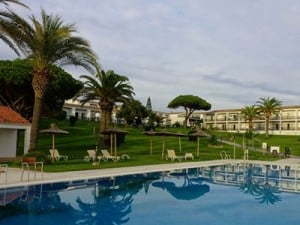 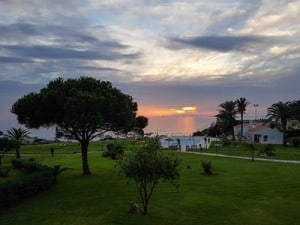 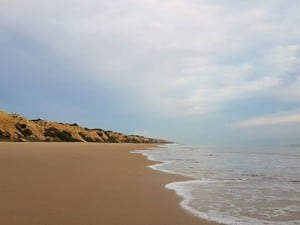 After crossing the Doñana National Park and taking the old ferry across the Guadalquivir River, the next day we arrived at the Mazagón Parador right on the beach , which compensated us with a beautiful sunset over the sea. 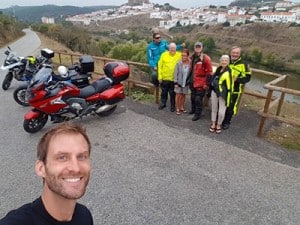 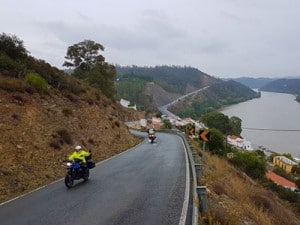 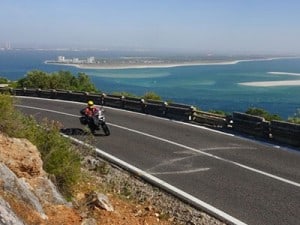 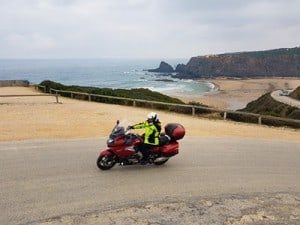 The next few days we drove through the relaxing landscape of Portugal. First we rode the peaceful gentle sweepers of the interior of the Algarve in Southern Portugal. Then, the route became twistier in the hills of Monchique, which after the forest fires of the previous summer, were converted into a fascinating bare steppe landscape. Finally, skirting the Atlantic beaches we enjoyed the magnificent views along the coast of the Sierra de Arrabida, until we arrived at the picturesque village of Cascais.. The 5 star hotel in Cascais is an old citadel, completely renovated with an elegant modern style and located with fantastic views of the marina. After another day of rest, highlighted by excellent meals of fresh fish, our return trek to Spain was ready.  This would include the impressive stages heading to Évora, Seville and then to Arcos de la Frontera. These stages were incredible but the best routes of the trip were still waiting for us! 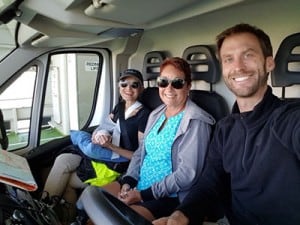 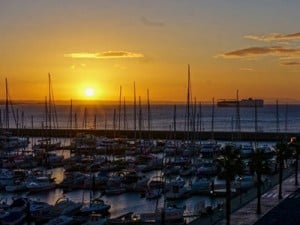 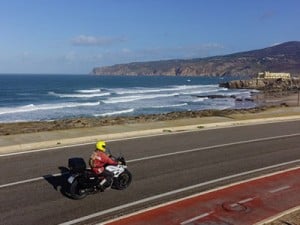 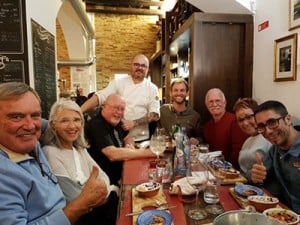 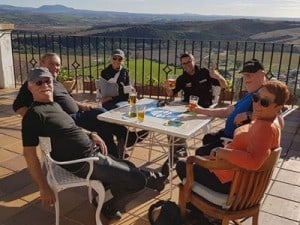 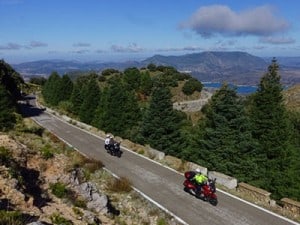 Amazing Andalusia was waiting for us with beautiful sunshine. Even in the Sierra de Grazalema, the rainiest area of ​​Spain, we were greeted with blue skies and sunshine as we crossed one of the most beautiful mountain passes in Andalusia. We were amazed by the magnificent views of the white village of Zahara de la Sierra and the tremendous route around the lake. Fortunately, I always carry my camera with me and I am very lucky to be able to combine another one of my hobbies with this motorcycle touring. Taking good photos entails: getting ahead with the van, finding a good place to park and then a sprint a few hundred meters to find the best photo-spot. Every once in a while I would get back in the van breathless! But it didn‘t matter to me because it’s definitely worth it! 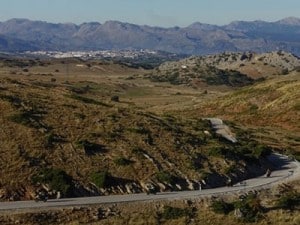 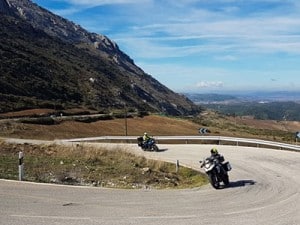 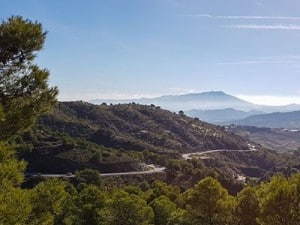 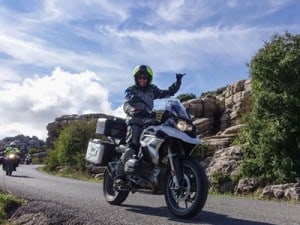 We spent the last two days of mountainous roads with overnight in Ronda, known as the “Balcony of Andalusia.” We all enjoyed endless curves through the Serranía de Ronda and the Sierra de las Nieves; and none of the American clients ever spoke again about the well-known American route “Tail of the Dragon”, famous for its 318 curves in 18km!On November 3, after a total route of 2500km we all returned very happy to Malaga. The last kilometers gave me a feeling of sadness, but it also gave me the good memories of so many laughs, of gastronomic delights and above all, of the multitude of wonderful landscapes. On the last night, when we were dining on another cozy terrace in the center of Malaga, Mike hit the nail on the head: “Andalusia and the whole south of Portugal is one long incredible “Tail of the Dragon.”  Mission accomplished – I think we managed to share the love and brillance of riding a motorcycle in Spain! Before the night ended Sergí and I went to have the “penultimate”(last drink) together – “Good job, partner!” 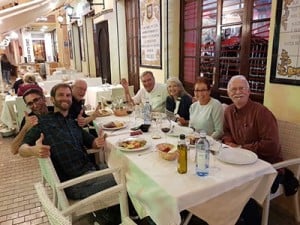 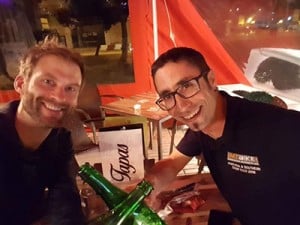 Even today, a few months later, I still have this warm feeling. I already knew it before, but the trip confirmed my thoughts clearly: being an IMTBIKE motorcycle tour guide is a “good job, partner!”. For me it is the best job I can imagine. In addition, I feel very fortunate to have found a company as professional as IMTBIKE. For the next motorcycle trip – see you in Morocco !!!