Phone notification, “new email”. I nervously open the inbox and there it was at last, the manual, the bible. Finally the guide book for what was going to be my first tour with IMTBIKE had been sent to me. As soon as I looked at the cover I thought: ‘Hey, it sounds good … Cantina Tour! J ‘.

I then went on to imagining a motorcycle tour through the best canteens and taverns in the southern part of the peninsula … Something like a mixture between the Iberian and Hispanic… A kind of “El Zorro” type of tour :D. “Ah wait, this isn´t about mariachis or canteens!” – I started reading the manual and realized it wasn´t quite what I had first imagined.
“Can-Tina,” I repeated to myself several times. At last I was beginning to understand. One part of the group came from Canada, and the rest from Argentina. It was from there on that I understood this was not just about riding motorcycles. I expected to receive a “road book” and I found an instruction book instead. It was something that would seem obvious to many but not to someone whose last group trips were called “Kalahari Challenge” or “Wild Lesotho.”

This was about people. For IMTBIKE it was essential that this came through from the beginning, and naming this tour after the members’ nationality was a clear example. It was then that the words of Scott and Martín about the importance of knowing our clients well came to mind. They rightly told me that each group was different and each has its own personality. I then realized it wasn´t going to be easy. Ahead was a mix between two separate cultures as different, the Argentinean and Canadian. Add two very diverse countries as Spain and Portugal and finally place myself right in the middle.  But here came Chano to the rescue. The most experienced guide of the company and lucky for me the head guide on my first adventure with IMTBIKE. Chano is a very happy person and at the same time he’s serene, a real genuine person and a gentleman. He’s an open book, some might say. So thanks to Chano everything went fantastically, but also thanks to the group. Most of them had already ridden together in previous tours and had since developed a beautiful friendship that surprised me pleasantly from the beginning. I remember the ´welcome briefing´well. Some of the Argentineans told us with shiny eyes about their recent journey to Canada to attend the wedding of another tour member. This trip was also about friendship, people cracking jokes, plenty of smiles, a welcoming attitude and of course everyone having fun, a perfect combination.

I also have to admit that it was comforting to see how they talked to each other, each person made an effort to be understood either in English, Spanish, or in a mixture of both. That certainly made it easier for us!

Surely at this point you might be wondering about the state of the bikes chosen by each of the members of the group, or the roads, the weather, etc. Perhaps many others may be curious about the quality of the hotels or the food we enjoyed during the trip.

I preferred to not answer those questions here because for someone who was born and raised in Andalusia it is almost impossible to find a better place to live and ride a motorcycle. And also because I learned that the truly important thing about this trip was meeting with an unforgettable group of people. After all, this is about people. 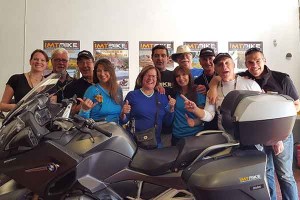