This was my biggest worry before leaving my house for the Sants station to catch my train to Malaga.

A few weeks earlier I had recieved a phone call from Martín at IMTBIKE. Together with Scott, they had decided to offer me an oppurtunity as a tour guide driving the support van on the ten day Morocco Adventure Tour in October.

I was so excited I could hardly contain myself. It would be my fifth time in Morocco, a country I love to travel in and to return there as part of the IMTBIKE team would be a true pleasure.

My travel companion and co-worker for this trip was Roger, a personal friend for the past two years and a Morocco expert who has guided countless trips there with IMTBIKE.

I met Roger at the Sants station and we boarded the high speed train to Malaga. That’s where the tour began and where all of the motorcycles are stored at IMTBIKE’s Malaga office. As soon as we arrived we got busy preparing all of the motorcycles, a job made much easier with the help of Nacho and Miguel, the two-man crew in charge of the Malaga office. We also double and triple checked all motorcycle and border crossing documentation sent to us from the central office in Madrid although I have to say it was all there, perfectly organized and ready for us, another important detail that made our job easier.

Finally the moment arrived for the welcome breifing. Roger opened by introducing himself, then I did the same and on to each one of the tour members. It was a large group, eighteen people plus two guides, sixteen motorcycles in total. There was already a great feeling in the group composed of people from the US, Canada, New Zealand and Ireland.

After the breifing we went out to dinner where we all got a chance to talk and get to know eachother. But we had to wrap things up before it got too late because the next day was going to be a long one.

First riding day of the tour, here we go! The bikes were all ligned up perfectly in front of the hotel. One by one we handed over the keys and checked over the bikes together. When everyone was ready, van loaded with luggage, Roger put his bike into 1st gear and we hit the road.

When all the bikes had left, we started off after them, Carmen and me. Carmen was travelling with her brother, one of the riders but she prefered to go in the van. We hit it off right from the beginning and enjoyed eachothers company during the whole tour.

The first day was the most intense, from Malaga to Algeciras, then a ferry to Ceuta where we crossed the border into Moroccos, and then a 300km+ ride to Rabat.

Once past Rabat we started to really get into the heart of Morocco as we rode to Marrakech. We also talked about the first day and everyones initial impressions of Morocco, no one was left indifferent!

The truth is, there is something rather special about travelling in the van. Once you get used to it, it’s just like driving a large car. It allows you to maintain a healthy pace while trying to stay within sight of the motorcycles, not always an easy task since a group of bikes is much more agile than a large utility van. I’ve always enjoyed driving the Moroccan roads and this time was no different.

And this group maintained a healthy pace, making it a challenge to follow them at times, especially in towns and cities.

The hours and kilometers fly by in the van accompanied by entertaining conversation and of course good music.

As the days pass and the kilometers pile up I started to really get the hang of things, load the van, hit the road, stop for coffee and snacks with the group, then more driving, lunch, afternoon coffee, photo oppurtunities, arrive at the hotel and unload, review the day and prepare for the next, head to the nightly breifing, dine with the group, sleep, and repeat!

In Fez we had a rest day to visit the ancient Medina, a special place full of life, colors and smells that you’ll either love or you won’t. In the afternoon we relaxed at the hotel and began to prepare the following day.

I loved watching Roger work as he moved around the cities and the country, always at ease and in control; I could tell that he had done many tours. This was an important detail and I was able to learn a lot. It also transmits safety and confidence not only to me but to the whole group.

From Fez we had the final stage of the trip to the port of Tanger Med, stopping in Chefchauen for lunch. The border crossing was much faster leaving the country then it was when entering and we suddenly found ourselves waiting for the ferry. We crossed the Straight of Gibraltar and arrived in Algeciras where we stayed for the night and had the final dinner together with the group. It was both exciting and emotional for everyone.

The next morning we rode the final few kilometers to Malaga and back to the IMTBIKE offices where the trip officially ended.

We were sad the trip was over but at the same time happy for all we had seen in the past ten days travelling around the most spectacular parts of Morocco.

For me it was an unforgettable experience not just because of the trip but also because of each one of the tour members that I was lucky enough to get to know and share moments with in such beautiful places.

Without a doubt I am already looking forward to my next trip with IMTBIKE. 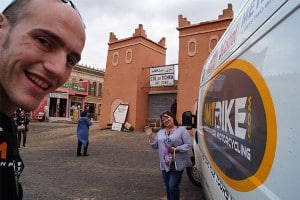 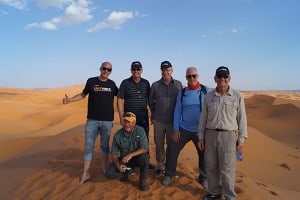 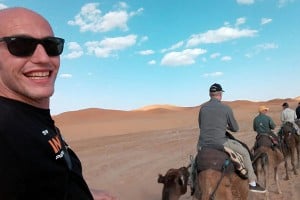 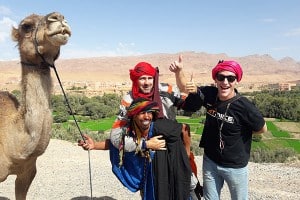