It was a dream come true when Scott offered me the opportunity to be the support guide on my first IMTBIKE tour. And for my luck, it was going to be on the Best of Portugal tour. Being a native Portuguese I could help the group to surpass some cultural barriers, explain them some curiosities and fun facts about my country and our costumes. My assigned head guide was going to be Super Chano. With more than 20 years of experience and being the first guide on the company, I was very excited to learn as much as I could from him.

I had met Super Chano some weeks before the tour and we met again on the morning of the briefing day, to prepare all the bikes and recheck everything. This day passed super fast, the work was non-stop until we meet with the group on the hotel for the briefing. As always, punctuality was right on the spot.It was very easy for the members of the group and us to spot each other on the hotel lobby, everyone had that look of excitement on their faces.We reserved a nice spot on the lobby for all to sit down, handled maps and tour guides to everyone and placed our map on the center table.

Everyone presented themselves and for the first time I could associate names with the faces. Chano was able to capture their full attention to the tour briefing.On this group there were 1 Brazilian couple, 2 Argentinian couples, 1 Chilean and 1 Australian. This required an almost real time translation of Spanish, English and some Portuguese during all of the tour. It was fun!

After the briefing we had our first dinner as a group, and despite it was all a bit crazy outside (because Benfica one of Portugal’s lead football teams was a champion and everyone was doing celebrations on the streets), we managed to have a nice dinner with typical Portuguese dishes and wine. 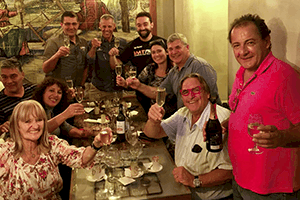 On the next morning everyone got to know their new motorcycles and we supported them with all the remaining questions they had. I loaded the van with the luggage, set up the GPS’s and we started the tour!

Since the very first day, photos, videos and thoughts were shared on an internal Whatsapp group, that was fun and it continues until today.We did coastal roads, went to the most western point of Europe, slept in historic charming hotels, crossed mountains, followed rivers, visited beautiful cities and stopped for a bit on the highest point of Portugal. Entered Spain, did lots of twisties roads, almost zero highways and were even able to take a dive in the sea. Saw where Columbus departed from Europe, crossed the interior of Algarve and returned to Lisbon through scenic routes, and making some stops for photos and nice food.

These 10 days were very intense, the roads were amazing (even on the van they were fun), the weather helped us and we never forgot the focus on the job and punctuality. It was great to see such a diverse group moving from being strangers to a group of friends. I especially loved the conversations after dinner, everyone getting to know each other, sharing experiences, knowledge and always being respectful to each others.

From the van I noticed their riding skills improving day by day. Some prefer to be on the back, some on faster some slower, no problem and no pressure, Super Chano always waits for everyone. And the van is always the last. 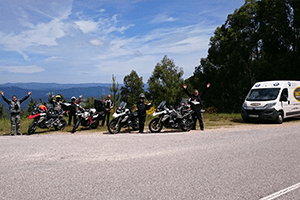 As days and kilometers passed and we were on adventures together, I had several good feelings and the strongest one I can say is caring. Always being aware of their needs if possible even before they happen, to have fun with the group, to document everything with best pictures and videos possible and of course to look after all the bags and never leave anything behind on any hotel.

All days were different, we had local typical food and experienced the best roads Portugal has to offer. Even on the rest day some of the members decided to use their motorcycles to explore OPorto city!

And then back in Lisbon after the final dinner and drinks, you realize we were riding with a group of amazing human beings that are now your friends.And that is forever. 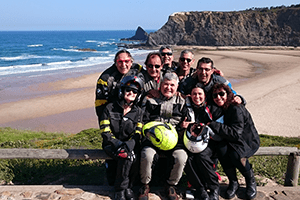 Looking forward for the next tour, I hope to see you all again.