A Tale of Three Castles

Words and images by Ryan Brunhaver

Madrid is one of the best cities in the world for a motorcyclist. We have a warm, dry climate and are surrounded by mountains full of twisty roads and grippy pavement. There are dozens of great rides within an hour or two of the capitol providing us with a plethora of options for a one or two day escape on two wheels.

When you rent a motorcycle with IMTBIKE we are always happy to sit down with you and point out our favorite roads on a map before you start your ride. Some of us were born here, others moved to Spain for the riding but we all have something in common: a passion for motorcycling that we are excited to share with you.

The country of Spain is littered with hundreds of castles left over from the 800 years of turmoil during the Moorish conquest and the Catholic “Reconquista.” Many of them were built by the Spanish on top of existing fortresses or “Alcazars” (from the Arabic Al-Qasar) during the Reconquista and some were never retaken leaving them in relatively good shape today.

Leaving Madrid I rode towards Segovia on the scenic highway over the mountains past the Navacerrada ski area. If you’ve never been to Segovia I highly recommend turning this into a two day ride and spending the night there. The Roman aqueduct, impressive cathedral and story book like castle are three main reasons to spend the afternoon exploring, not to mention that the food is excellent and there are many hotels.

I circled around Segovia to the south and then took the CL-605 heading northwest through the town of Nieva and then continued on a bit further to my first destination for the day, Coca. In this small town stands a one-of-a-kind castle built in Gothic-Mudéjar style with lavish hexagonal turrets. The castle dates from the year 1453 and was built on top of an older fortress.

You can visit this castle and all the main rooms and halls during opening hours. Supposedly there are also some secret passageways hidden below but they are closed to the public. They are underground tunnels that lead to seven of Coca’s churches.

Interestingly, in 1954 ownership of the castle was transferred to the Ministry of Agriculture to set up a Forestry Training School. I don’t know about you but I wouldn’t mind attending class in a 15th century castle! 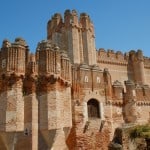 Leaving Coca I took the quiet and pretty SG-332 and later the SG-222 towards Turégano. This peaceful country lane brought me past huge fields of sunflowers and small Castilian towns typical of Castilla y Leon.

The region of Castilla y Leon is arguably the most traditionally Spanish of the 17 regions or “Autonomous Communities” of Spain. In it you’ll find perfectly preserved medieval villages with half-timbered houses, vast plains, high mountains, fabled cities such as Salamanca and Avila and hearty meals of grilled meats accompanied by delicious, full bodied red wines. The more I explore Spain the more fascinated I become with Castilla y Leon. Andalucía has its Flamenco, Catalunya has the Pyrenees, Valencia the Mediterranean and Galicía has its green hills and famous pilgrimage but Castilla y Leon lives and breathes as Spain’s true heart and soul. The best part is that it’s not very well travelled and is packed with hidden gems. Much of it still feels frozen in time. Today I am only riding a small part of it but I know that when the day ends I will feel a tug inside to return soon and dig deeper. 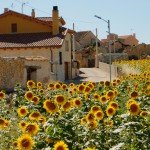 In Turégano I was presented with castle number two for the day, a 15th century castle/church watching over the town. In the photo below you can see the bell tower of the church and the way the church itself was integrated into the castle tower to the right. The church, its bell tower and the castle tower were all built in different periods and if you look closely you can see the different way the rocks were cut and constructed.

Like the castle in Coca, this one was built on top of an older fortress and you can still see the ruins of an outer “curtain” of Islamic origin.

I wandered around the castle grounds for a while and admired this piece of history while trying to imagine what it would have been like in its day. I knew I didn’t have time for a proper visit inside of each castle today so I satisfied myself with a few photos and decided to be on my way.

The road up to the castle was, conveniently, the same road I wanted to take to Pedraza de la Sierra and the final castle of the day. There are a few roads that will take you there and in Spain there are always many interesting roads that will take you to the same place. I recommend being adventurous in your route planning since Spain is a very safe country and the enormous network of great roads means you can find yourself far off the beaten path with relatively little effort. The proximity of the hills 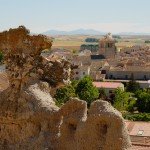 and mountains to the south mean the roads leading up to Pedraza were much curvier than I had seen for the last few kilometers which I enjoyed immensely, twisting and turning through the countryside accompanied by the bright light of the Spanish sun.

Approaching Pedraza, the imposing castle alerted me of the town’s presence long before I saw any signs of civilization. 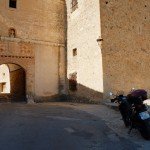 stopped at the entrance to admire the powerful gate.

Once I passed through the gate I realized quickly that I had found another gem. The time worn streets blend seamlessly with the brown stone of the local dwellings making it difficult to tell where the cobblestones stop and the houses start. The entire town is built with beautiful stonework and the absence of new buildings inside the town walls transports you back in time the moment you set foot there. 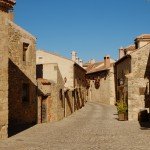 I continued riding through the evocative lanes leading to the highest part of town and the 15th century castle which was, you guessed it, built on top of an earlier 13th century fortress. It’s built right on the edge of a cliff at the high point of the town, itself located on the top of a hill. The now ruined draw bridge must have made for quite the defensive system in its day since it would have been the only way in. 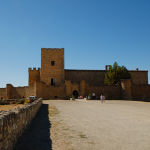 Strolling around town I couldn’t help but be enchanted by the long shadows and warm afternoon air. It’s the perfect place for a nice meal or, in my case, an afternoon snack and a coffee. 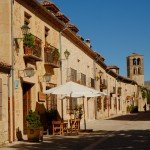 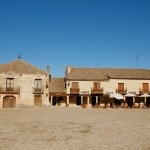 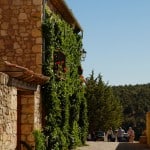 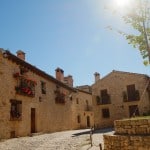 Eventually I decided it was time to leave town, I could see the road winding off into the distance back towards the Sierra de Guadarrama Mountains. The Guadarrama range forms a natural boundary between Castilla y Leon and the region of Madrid and was my next geographical conquest of the day. 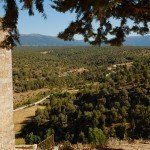 From Pedraza I pointed my wheels towards Galindez and then over the Puerto de Navafría. This is a little known mountain pass set deep in a thick pine forest. There is rarely any traffic but the road is often full of pine needles and if there is any moisture present they can be as slippery as ice so I always take it easy on this road. Once I arrived in Rascafría I had two options. The rest of my planned route parallels the A-1 freeway 20km to the east giving me the option to take the fast way back to Madrid whenever I want.

I chose instead to link one more mountain pass with a series of smaller roads to return to Madrid on the scenic route. From Lozoya, I headed south to Rascafría and then up and over the Puerto de Morcuera to Miraflores de la Sierra. This is an excellent, but narrow road that starts out climbing up through a pretty forest, then into a bare, rocky landscape before finally arriving at the summit at 1800 meters. The views from the top are impressive and on a clear day you can see the “Four Towers,” Madrid’s only skyscrapers and the most defining aspect of its otherwise low-lying skyline.

From Miraflores I headed to Soto del Real and then Colmenar Viejo where the road turns into a four lane freeway for the last stretch back to Madrid. If you stay on this highway and look for signs for “Paseo Castellana” it will take you straight into the northern part of the city and right past the “Four Towers” which is, in my opinion, the most impressive entrance into the metropolis. The Paseo Castellana is a long, wide avenue that runs the length of the city from the north all the way to the historic center, the Plaza de Cibeles, the Prado Museum and the Atocha Train Station.

The entire route for the day will be about 350km depending on which small roads you use but I recommend getting an early start so you can pace yourself, enjoy the views along the way and of course stop in a small town for a relaxing lunch.  As always, ride safe and have fun! 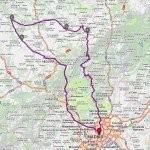 IMTBIKE, Official Partner of BMW Motorrad, is the leading Motorcycle Tour and Rental Company in Spain, Portugal, Morocco, Europe, and the Mediterranean. Leading the way since 1997.